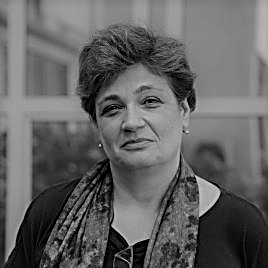 Adriana Martins is currently Assistant Professor with Habilitation at the Faculty of Human Sciences (FCH) at Universidade Católica Portuguesa (UCP) in Lisbon, Portugal, where she teaches courses on culture and globalization and Portuguese culture and film at B.A., M.A. and Ph.D. levels. She holds a PhD in Comparative Literature from UCP, where she also obtained her Habilitation in Culture Studies. She has coordinated the scientific area of Culture Studies since 2019. Between 2011 and 2019 she was the FCH International Relations Coordinator. She is a Senior Member of CECC (Research Center for Communication and Culture Studies), integrating the team of the research line on Culture, Art and Conflict. She has published widely on Culture Studies with a focus on Film Studies and on Comparative Literature. She joined COST Action CA18126 Writing Urban Places. New Narratives of the European City to investigate literary and non-literary texts that address contentious politics of memory representation through which urban geographies of (in)justice, anger, surveillance and conviviality are delineated and confronted. She can be reached at adrimartins@fch.lisboa.ucp.pt